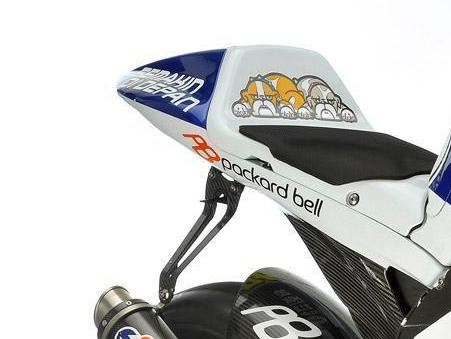 Yamaha world wide business were dismal in 2009, part of  it was due to the world economic crisis. But not in Indonesia. Just last year, Yamaha sells about a million and a half  (yup 7 digit figures) units of motorcycle in Indonesia, all of them were moped and small cc bike. Correct me if I’m wrong, but in term of unit sold Indonesia is the highest for Yamaha in the world and still growing.

Yamaha main competitor for Indonesia? Is Honda, both of them is neck-to-neck (too bad that was not the case for Honda MotoGP team) to get the most sell. And it was very close for Yamaha and Honda with Suzuki a very very distance third.

The sticker was not without controversy in Indonesia, with bloggers complaint that the cost for putting that “SEMAKIN DIDEPAN” word was at the cost of sacrificing Indonesia’s only rider in the world stage.  Indonesia’s Dony Tata was pulled from the WSS team and will only race in the Asian level.

I do hope that putting that word in the back of M1 can bring positive impact for Indonesia’s motor cycle racing future, but I just don’t know how.

19 thoughts on ““SEMAKIN DIDEPAN”, how important is Indonesia’s market for Yamaha?”